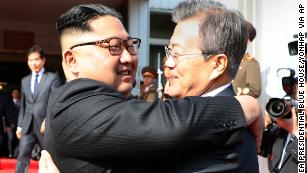 Kim Jong Un, left, and Moon Jae-in embrace after Saturday’s meeting at the DMZ.
The two “exchanged their opinions” on among other things successfully carrying out a future US-North Korea summit, according to the statement. On Thursday, Trump called off a June 12 summit with Kim in Singapore but then told reporters Friday he’s still open to a conference.
Moon will announce the result of his meeting with Kim on Sunday morning local time, the South Korean statement said.
In a tweet Friday, Trump maintained “very productive talks” were continuing on the North Korean summit.
“We are having very productive talks with North Korea about reinstating the Summit which, if it does happen, will likely remain in Singapore on the same date, June 12th., and, if necessary, will be extended beyond that date,” Trump wrote.