Prince Harry and Meghan Markle are married! On Saturday, the pair became the Duke and Duchess of Sussex after they exchanged vows at St. George’s Chapel at Windsor Castle.

Despite rumors that she hadn’t scored an invitation, Sarah Ferguson, the Duchess of York, attended the nuptials. The former wife of the groom’s uncle Prince Andrew was not invited to Kate Middleton and Prince William’s 2011 wedding.

As were Fergie’s daughters, Princess Beatrice and Princess Eugenie.

But all eyes were on the royal family.

Prince Harry and his brother and best man, Prince William, were among the first members of the royal family to enter the chapel. They were followed by cousins, including Zara Tindall, and Queen Elizabeth and Prince Philip (who walked without assistance after recently having undergone hip surgery).

The Duchess of Cambridge rode to the ceremony with the wedding party.

With Prince George and Princess Charlotte serving as pageboy and bridesmaid, the Duchess of Cambridge went along for the ride to the ceremony. She is wearing what Kensington Palace called “a primrose yellow wool silk tailored coat” by Alexander McQueen with a hat designed by Philip Treacy and shoes by Jimmy Choo.

both made surprising style choices.

Meghan Markle walked into the chapel with the pageboys and bridesmaids.

Viewers got a first look at Markle’s gown when she exited the Rolls-Royce she traveled in from the Cliveden House hotel to the chapel with her mother, Doria Ragland.

The Duke and Duchess of Sussex make their public debut!

Now officially known as the Duke and Duchess of Sussex, the couple traveled in a carriage through Windsor for 25 minutes before heading into the lunchtime reception. 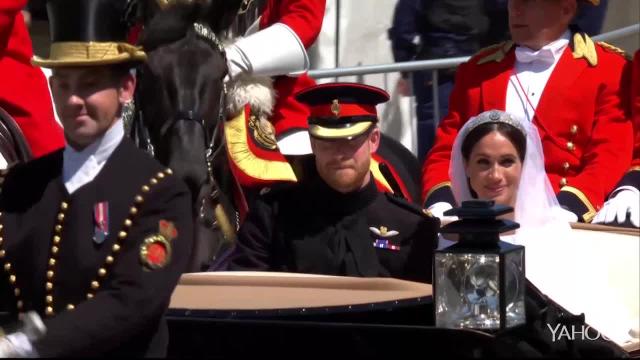 Her Majesty the Queen hosted the lunchtime reception at St. George’s Hall in Windsor Castle.

California-born baker Claire Ptak created the cake, which was cut by the newlyweds at the luncheon.

Watch the highlights from the Royal Wedding procession through Windsor.